Ticket to Earth (TTE), developed by Robot Circus, was a wonderful opportunity for us to express our creative ability as not only a compositional studio, but also as a sound design house.

Robot circus first approached us back in July 2016 to see if we could create some original pieces of music for their futuristic turn-based game. That initial collaboration was so successful that we all agreed samplify should provide all the music, audio and sound effects for the game.

The project ended up being quite a large showcase for us, with the scope eventually reaching around 10 original battle music cues, 7 map ambience music cues, 15 in-level background sound ambiences, and thousands of action-specific sound effects.

We worked very closely with Robot Circus and their middleware implementation at each stage of production, to help them realise their vision for TTE. 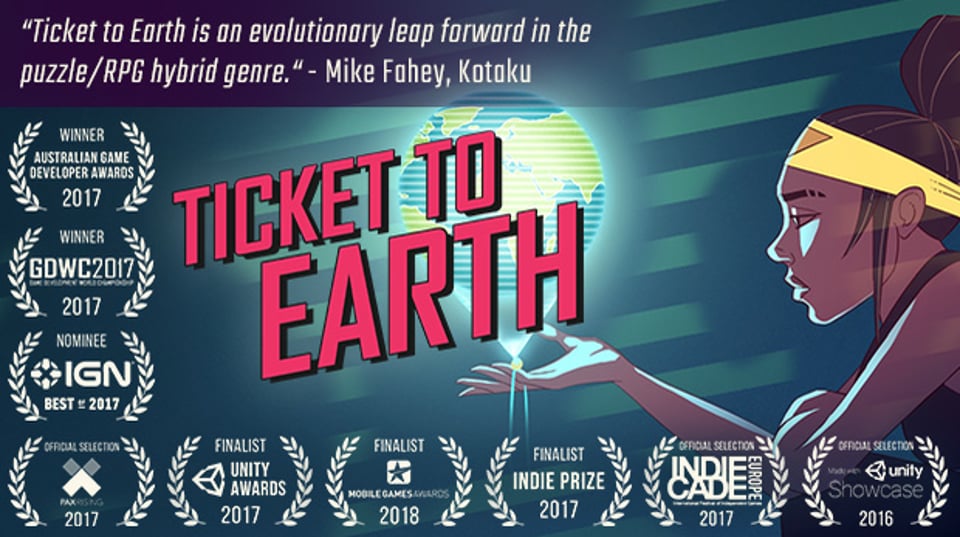 Our biggest challenge was creating a cohesive audio profile for the game as a whole. TTE is set in a futuristic, yet realistic, environment, and creating a mix of both these elements within the sound profile was paramount to the feel of the game, both musically and in the sound design.

This in turn was also the greatest challenge from the sound design perspective. With such a wide variety of sounds to be crafted from scratch, it demanded a lot of forward thinking and planning.

The music we created for the game exemplifies samplify as a studio, fitting comfortably in our repertoire and showing a confluence of our musical abilities. With a heavy background in electronic music, a focus on orchestral composition in recent times, and our work composing for film, it all came together to enable us to create the ideal music score for TTE. The music cues include styles of techno, drum and bass, ambient, and funky breaks. While individually quite different, they all fit appropriately within the game. The distinct and original music cues help strengthen the immersive nature of the audio package we delivered as well as emphasising the game’s sonic identity.

Our considered aim was to create futuristic sounds with organic, real world influences. We used recordings of real world sounds and layered them in subtly with synthesised, created-from-scratch sounds, to give everything a touch of that real world feel. Each sound in the game, from dialog through to footsteps, was treated individually and as a whole, allowing us to make distinctions between different characters whilst retaining a connection to the overall feel of the game. One of the tools we relied on heavily for the treatment of the SFX was Logic’s Space Designer. Space Designer is a meticulous convolution reverb that offers a limitless amount of potential. From pure room treatment through to weird, evolving spaces, it was the go-to audio processor for our sounds.

The dialog was another challenge. Each of the characters has their own personal flair and attitude, and with each vocal response to game play we needed to support and illustrate that diversity. We enlisted the help of several talented voice artists to achieve the individual character personalities, and set about recording them yelling, grunting, wincing and grimacing into our microphones. After we had the dry recordings tracked into Logic we then went about editing and processing them. Whilst the artists were critical in conveying the various personalities of the many characters, the way in which we processed the dry audio was also important. We gave each character his/her own sonic identity to help reinforce the specific persona, while keeping in mind the realistic nature of the game. The end result is a nice mix of strong vocal performances and subtle, albeit effective, sound design.

It is one thing to create brief-specific sounds in isolation but quite another to make sure it all works well in context.

To achieve cohesion, many developer builds were shared with us along the production process from Robot Circus, so we could hear our audio in context as the game evolved. We then made note of what was and wasn’t working.

With such a variety of sounds, ambiences and musical elements, often all happening at once, it was paramount they all worked together to create the immersion needed.

It needs to be noted that all of the work was done inside Logic Pro X with heavy use of the logic plug-ins. We find that Logic is set up in a very intuitive way for editing and writing for gaming. This allows us to focus more on the creative aspects of getting the audio right – Logic has some of the best native plug-ins for creative sound design.

Ticket to Earth is a beautifully made game that is addictive and fun to play. It was a pleasure to create the audio and then test it in-game as we progressed. The end result of our work is an audio profile that is descriptive and immersive, bringing a clear, specific flavor to the game. With lush ambiences, futuristic weapons, cool drum and bass and a range of other audio goodies, we feel this was a job well done.

The game was very well received last year at PAX and GDC and was released in April of this year. Upon it’s release it spent a number of weeks featured on the Apple app store’s front page. Check out some of the footage and reviews below.

“the music and sounds are amazing”

“The pounding music is also terrific and really drives the game forwards.”

“Combined with a good story, nice graphics, and an awesome soundtrack, this game feels special.”

“The soundtrack is certainly impressive in its own right. It does an excellent job of pacing the game. When Ticket to Earth wants you to pay extra attention to a line of dialogue or to something happening on the screen, the music will soften. When it wants you to enjoy the fast-paced combat the music will start pumping louder and louder given you a perfect soundscape to bash in some skulls.”